TORONTO, Nov. 06, 2019 (GLOBE NEWSWIRE) -- Emerita Resources Corp. (TSX-V: EMO) (the “Company” or “Emerita”) is pleased to announce that the Supreme Court of Spain has rejected the appeal by the Junta of Andalusia and reaffirmed the ruling of the High Court of Justice of Andalusia (“the High Court”) with respect to Emerita’s challenge of the awarding of the public tender for the Paymogo Zinc Project (the “Project”) in Huelva Province, Andalusia Region in southern Spain.  The Project which occurs within the famous Iberian Pyrite Belt volcanogenic massive sulfide terrane, hosts two zinc deposits (see below for details).  The Project was subject to a public tender process in February 2014.  Subsequent to the awarding of the tender to a competing participant, Emerita filed an appeal of the process due to irregularities with respect to the scoring of the bids.  When the bids were initially scored, the Junta awarded points to a competing bid in categories that were not part of the tender process.  As such, other participants in the public tender were disadvantaged as they did not address these points in their submissions.

The ruling by the High Court confirmed Emerita’s assertion and annulled the awarding of the tender indicating that the bid results should be recalculated excluding the offending criteria (categories C and H).  Following is a summary of the hearings:

Joaquin Merino, P.Geo, President of Emerita stated: “Emerita is very happy with the decision of the Supreme Court.  We are prepared to meet immediately with the Mining Authorities in Huelva and finalize the awarding of the Paymogo Public Tender to Emerita.  We look forward to working with them to initiate the work program for the Project as soon as possible.  The Company will conduct its exploration program to the highest environmental standards and with full regard for the health and safety of the community and our employees.”

David Gower, P.Geo., CEO of Emerita stated: “The Company is excited by the outcome and prepared to begin work on the Paymogo project as soon as the tender can be finalized, in line with the instructions from the courts.  We are highly encouraged by public statements from senior officials of the new Government in Andalusia that they will abide by the rulings of the court and that they look forward to seeing the economic activity and potential job creation such a project can generate.  The Paymogo project is highly prospective in our view and we are excited to work on its development.”

The Paymogo project occurs within the famous Iberian Pyrite Belt, one of the most highly mineralized volcanogenic massive sulfide (VMS) terranes in the world.  The Project is located in the western part of the belt, adjacent to the border with Portugal, approximately 70 km west of Seville and 50 km from the port city of Huelva (Figure 1).  The Project extends along a strike length of approximately 18 km.  Access is excellent via paved and all-weather gravel roads.  Within the Project area, several base metal occurrences have been identified by previous exploration, the most significant of which are the Romanera and the La Infanta base metal deposits.

The La Infanta mineralized zone has been drilled from surface where it outcrops to a depth of approximately 100 meters. Numerous high-grade intercepts (see table below) occur within the zone and it remains open for expansion at shallow depths.  Drilling was completed by Phelps Dodge in the mid 1980s.  La Infanta is located approximately 8 km to the east of the La Romanera deposit.

A photo accompanying this announcement is available at https://www.globenewswire.com/NewsRoom/AttachmentNg/90cb75e6-7d68-4cb6-adcd-a1cc3127ffcc 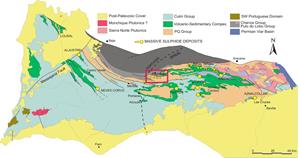 Location of the Paymogo Project 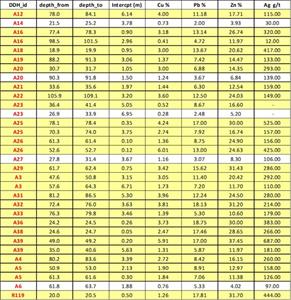