TORONTO, May 03, 2019 (GLOBE NEWSWIRE) -- Emerita Resources Corp. (the “Company” or “Emerita”) (TSX-V: EMO) along with its partner, Aldesa, announces that drilling is progressing on its Plaza Norte zinc project (the “Project”) located in Cantabria, northern Spain (Figure 1).  To date, two drill holes have been completed on the Queveda target.  Both drill holes have intersected significant intervals of sphalerite (zinc mineralization) at the target horizon.  The distance between the two drill holes is approximately 300 meters.  Samples have been submitted to the ALS Laboratory in Seville, Spain for preparation and analysis.  Results and complete details will be reported when they are received.

David Gower, P.Geo., CEO of Emerita, commented, “It is very important to have such strong support from the government and the community in which we work.  The Government of Cantabria has established a framework for responsible project development and permitting which provides a clear process for companies investing in the region.”

Cantábrica del Zinc, Emerita’s and Aldesa’s  joint venture company, initiated drilling on the Queveda target last month (see press release dated March 18, 2019). The Quevada target is one of four targets that have been identified by the Company based on historical drilling and other technical information. It is characterized by several historical intercepts containing significant amounts of sphalerite within a 1.3 km by 1.0 km area (Figure 2). Mineralization is hosted within Lower Cretaceous dolomitizied Urgonian limestones located about 3.0 km north of the past producing Reocín mine.

Mineralization was intercepted by the Company over approximately 7 meters at a depth of 592 meters. The logged sequences in Hole 001 are very similar to what was described in an adjacent hole that was drilled in the 1980s, with marker units and mineralized zones among other geological characteristics at about the same depth. The mineralized zone consists of abundant sphalerite and minor galena, with lesser marcasite and trace pyrite with dolomite as gangue. Replacement of host dolomite, open space filling of fractures, and cementation of breccias are the principal mineralized textures which are typical for this type of deposit.

Drill Hole 002 intersected 6 meters of sphalerite mineralization at a depth of 561.4 meters. Mineralization is hosted by dolomite with honey coloured sphalerite filling voids, as breccia matrix, veins, and locally displaying colloform texture.   Samples have been shipped to the laboratory.  Assays are pending and results will be reported when received.

Drilling was at a rate of 60m per day, with excellent core recoveries estimated at 99%.  Drill core samples are split and half shipped to the ALS preparation lab in Seville, southern Spain.  The other half is retained in the core box and stored.

In October 2016, Emerita announced that the Provincial Court of Seville, an appellate court, had ruled in favour of Emerita in its appeal of the lower court’s decision that there was not sufficient evidence of a criminal act in the Aznalcóllar project tender process (See press release issued October 28, 2016).

The appeal was heard by four judges of the Provincial Court of Seville (the “Court”) who ruled unanimously in Emerita’s favour in a 59 page judgement.  The judges’ decision was based on:

The judges found that there was evidence of gross negligence and misconduct and indicated that there may be evidence of possible corruption and prevarication. As such, the Court ordered the criminal case against the Panel to be reopened.

Deficiencies with the Bid by the Competing Bidder

The judges found that the bid submitted by the competing bidder should not have passed to the second stage of the tender process. The relationship between Minorbis and Grupo Mexico was not properly demonstrated in the documentation submitted to the Panel. Among other things, Grupo Mexico never registered in Spain or with the Spanish consulate, which was a requirement of participation in the Aznalcóllar tender.  Further, Minorbis-Grupo Mexico never submitted the necessary documentation demonstrating its solvency, which was a mandatory requirement established in the tender process, as set out by the Panel. The Panel contradicted the tender requirements by declaring that the Minorbis-Grupo Mexico bid was submitted solely by Minorbis and that Grupo Mexico had just provided technical and financial support.  The Court determined that this was not possible since Minorbis had been formed just 3 weeks prior to the deadline for submission of the tender, and according to administrative law in Spain, a company participating in a public tender has to demonstrate minimum experience and track record in that particular industry.

Failure to Consider the Technical Merits of the Tender Bids

The judges concluded that the Panel had failed to consider the technical details of the tender bids.   As an example, the Panel did not consider that Emerita’s bid contemplated double the investment compared to Minorbis-Grupo Mexico’s bid.  This decision failed to consider one of the principal objectives of the tender process, promoting investment to the region and creating opportunities for the community.

Minera Los Frailes did not Participate in the Tender Process

The judges concluded that awarding the Aznalcóllar project rights to Minera Los Frailes, a company that never participated in the tender process, contravened the laws and regulations governing public tenders in Spain.  Although it is not clear if it was Minorbis or Minorbis-Grupo Mexico that participated in the tender, the Aznalcóllar project was granted to Minera Los Frailes, a company that was created after the completion of the tender process.

The Court concluded that there were numerous administrative irregularities of a serious nature which occurred during both stages of the public tender process and as such the crime of “Prevarication” could not be discounted. The judges ordered the case against the Panel be reopened. This is a firm decision by the Court which cannot be appealed.

The Company’s external Spanish legal counsel has advised that under Spanish law, if it is found that the awarding of a tender involves the commission of a crime, the tender is automatically awarded to the next qualified bidder.  In the Aznalcóllar tender, Emerita is the only qualified bidder.

The Aznalcóllar project hosts the past producing Aznalcóllar and Los Frailes zinc-lead-silver deposits.  If awarded the tender, the Los Frailes deposit would be Emerita’s focus of development for restarting mining operations at the site.  The local community is strongly supportive of an environmentally and socially responsible approach to developing the site.

Following this very clear ruling, the panel of four judges instructed the lower court judge to re-open the case.  On March 12, 2019, the lower court judge re-iterated her position that she did not agree with the upper court’s conclusions and indicated she would not proceed with the hearing.   The facts of the case have remained unchanged as previously described by the upper court (summarized above and in a news release dated October 28, 2016).  As a result, the lower court judge’s decision been appealed by Emerita to the Provincial Court of Seville where the four judges who ruled unanimously in Emerita’s favour in a comprehensive 59 page judgement will rule on the case again.

There have been further developments in the Andalusia Region in southern Spain since the December election which resulted in the first change in government there since Spain became a democracy.  Representatives from Emerita are scheduled to meet with officials of the new government in the coming weeks.  The new government was elected on an anti-corruption, pro-business development platform.

Emerita remains committed to the acquisition and development of the Aznalcollar project for the benefit of all stakeholders.  As part of the initial public tender process, Emerita completed comprehensive engineering and environmental studies and as such remains the group best positioned to advance the project efficiently and with the highest environmental, health and safety standards.

David Gower P.Geo., CEO of Emerita commented, “We are excited about the prospects for the Company in 2019.  We are drilling on an excellent project, with a strong partner at Plaza Norte.  The support we have received from the Government and Municipalities in Cantabria region is exceptional.  The political developments in Andalusia provide us with some confidence that the disputes that have persisted for a number of years can now be resolved in a timely manner.  With the strong support of our shareholders, the Company will have a much improved capital structure that is expected to be more attractive for future investors.”

Joaquin Merino, P.Geo., is a “qualified person” as such term is defined in NI 43-101 and has reviewed and approved the technical information included in this press release and has approved its dissemination. 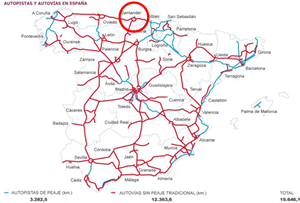 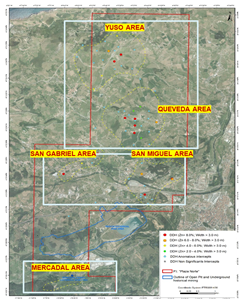