TORONTO, Oct. 04, 2019 (GLOBE NEWSWIRE) -- Emerita Resources Corp. (TSX-V: EMO) (the “Company” or “Emerita”) is pleased to announce that five judges of the Appellate Court of Seville (the “Appellate Court”) have unanimously ruled in favour of Emerita’s appeal of the lower court’s decision to dismiss a criminal case against the Andalusian government panel (the “Panel”) responsible for awarding the Aznalcóllar project (the “Project”) and the former Director of Mines of the Government of Andalucía (collectively, the “Accused”).  The Project was the subject of a multistage public tender process that the Appellate Court has concluded, based on a lengthy and detailed police investigation, was wrongfully awarded to Minorbis-Grupo Mexico (“Minorbis-GM”).  According to Spanish Counsel, laws relating to public tenders in Spain stipulate that if there is commission of a crime in the awarding of a public tender the bid shall be disqualified and the tender will be awarded to the next qualified bidder.  In the case of the Project, Emerita is the only qualified bidder.  Among other points raised in the lengthy ruling by the Appellate Court were the following:

David Gower P.Geo., CEO of Emerita, states: “We are highly satisfied with the detailed ruling presented by the Appellate Court and agree in full with the findings.  It is unfortunate that the Project has been delayed as a result of the illegal actions of those implicated during the public tender.  It is also important to acknowledge that these crimes occurred under the previous political regime and we look forward to working with the present administration to develop this important resource, with the utmost care for the local environment and for the safety of the community and the workers employed on the Project.  The ruling in its entirety is lengthy and detailed and the Company continues to consult with counsel and will consult with government officials to fully understand the process going forward and will report further as information becomes available.”

Joaquin Merino P.Geo., President of Emerita notes: “Emerita remains fully committed to responsibly developing the Project and working closely with all of the stakeholders.  Our approach to the public tender was very serious and included approximately $1,000,000 spent on technical studies to articulate the most effective and responsible way to develop the Project into a modern and safe operation.  The detailed submission which amounted to almost 10,000 pages puts Emerita in an excellent position to advance the Project efficiently as a significant amount of work and planning has already been completed by the Company.  We look forward to working with the government and community in the development of the Project.”

Emerita was the only qualified bidder in the Aznalcóllar tender process and under Spanish law should be awarded the Project.  Emerita remains committed to working with the community of Aznalcóllar to develop the Project in an environmentally responsible manner to benefit all stakeholders.

About the Aznalcollar Project

Emerita was one of only two companies to qualify for the final round of bidding for the Project. The Government of Andalusia and the Province of Seville announced the public tender for the past producing property (Concurso público para la adjudicación de la explotación de la reserva de Aznalcóllar en la provincia de Sevilla) in 2014 (see news release dated May 22, 2014). On December 16, 2014, Emerita submitted a detailed technical proposal, which was the final requirement for the public tender process.

The Aznalcóllar Project is a past producing property within the famous Iberian Pyrite Belt that hosted the Aznalcóllar and Los Frailes open pit zinc-lead-silver mines (see Figure 1).

The focus of the Project is re-development of the Los Frailes deposit which was developed in the mid 1990s. The historical estimate as calculated by the previous operator of the mine was estimated to be 71 million tonnes grading 3.86% zinc, 2.18% lead, 0.34% copper and 60 ppm silver (see Figure 2).

Reports by the operation’s mine department and a review of the diamond drilling data for the mine indicate the existence of a higher-grade portion of the historical estimate that was estimated by the previous operator to contain 20 million tonnes grading 6.66% zinc, 3.87% lead, 0.29% copper and 84 ppm silver. The Aznalcollar and Los Frailes deposits are open for further expansion by drilling at depth, as historical drilling was primarily constrained to depths accessible by open pit mining. A qualified person as defined in National Instrument 43-101 has not done sufficient work on behalf of Emerita to classify the historical estimate reported above as current mineral resources or mineral reserves and Emerita is not treating the historical estimate as current mineral resources or mineral reserves. A summary of the historical resource estimate is available from the Government of Andalucía in a report prepared by the prior operator of the Aznalcóllar Project entitled “Proyecto de Explotacion Yacimiento Los Frailes, Memoria Andaluza de Piritas, Boliden- Apirsa, Octubre 1994” (Los Frailes Development project Report, Boliden-Apirsa, October 1994) along with subsequent resource estimate updates, the latest being from 2000. The Los Frailes operation was only in production for approximately 1.5 years when a tailings dam failure along with low metal prices caused the former operator to shut down the Project. The Government subsequently completed reclamation and took ownership of the site.

Emerita would be prepared to commence work immediately upon receiving appropriate permits to carry out drilling on the property and complete an NI 43-101 mineral resource estimate required for the completion of a feasibility study in support of development of a mining operation at the site.

The Company developed the technical proposal based on a database collected from a number of sources including data provided by the Government of Andalucía comprising drill hole information, environmental data, and geotechnical and metallurgical data. Emerita understands the importance of community support for the project and had presented its proposal to the local community of Aznalcóllar, local and national union representatives, the Andalusia business community and local and national government agencies, among other institutions during the public tender process.

According to Joaquin Merino, P.Geo, Emerita’s President: “Emerita’s team has a great deal of experience with deposits similar to the Aznalcóllar deposits, including successful mine developments in the Matagami and Bathurst mining camps in Canada.  We have a strong technical team that put together an excellent proposal incorporating the most innovative technology and processes available to the industry globally.  The Company paid close attention to the technical aspects but more importantly also the social and environmental aspects of the project. Emerita’s team is confident that Aznalcóllar can be developed in a responsible manner that benefits all stakeholders.”

Figures accompanying this announcement are available at: 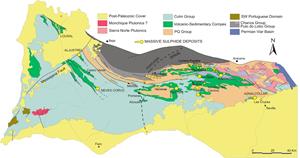 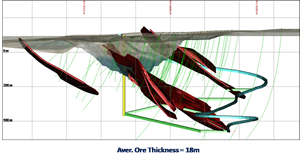 Figure 2: Deposit locations at the Aznalcóllar Project. The Los Frailes deposit is the mineralized zone in the center of the model and comprises the historical resources referred to herein.