The drilling is focused on evaluating high-grade Mississippi Valley type zinc-lead mineralization in the past producing Reocin mining camp located in Cantabria, northern Spain.  Initial drilling is following up on mineralized drill intercepts identified during exploration campaigns completed primarily in the 1980s and 1990s.  Analysis of the historical information identified 4 key areas as high priority targets for exploration. These areas are (from north to south): Yuso, Queveda, San Miguel and Mercadal.  All of these targets have significant mineralized intercepts, and Mercadal was the site of a past producing mine (Figure 1).

The first phase of the diamond drill campaign is focused on the Queveda target area, where several historical high-grade mineralized intercepts have been identified, including:

The objective of the drill campaign on the Queveda target area is to confirm zinc-lead mineralisation intercepted by historical drill holes and to improve the drill spacing such that an NI 43-101 mineral resource estimate can be calculated for the target. The target area, measures approximately 1,500m north-south by 600m east-west.

The first drill hole has confirmed the mineralisation at the expected geological interval.  Stratigraphy in the area is near horizontal. Significant intercepts are presented in Table 1. Hole-001 returned very similar grades and thickness compared to the historical holes. Deposits of this type commonly have a significant structural control.  The tighter drill pattern required to establish a resource should also serve to provide data on the structural controls of mineralization that would not be apparent with the present drill spacing where drill holes are approximately 250 meters to 350 meters apart.

Joaquin Merino, P.Geo., President of Emerita commented “We are excited by the results in the first hole of the program.  Drilling is progressing well and we will release additional results on completion of assays for several additional drill holes.”

The Reocin camp is classified as a Mississippi Valley Type Deposit. The principal geological feature is a wide syncline structure that characterizes the structure of the western end of the Basque-Cantabrian Basin, named the Santillana-San Román syncline, striking NE-SW. The property encloses most of the Santillana-San Román syncline, where the ore deposits occur, including the former Reocin mine which is located on the southeast flank.  The Reocin Mine had past production of 62 million tonnes grading 11.0 % zinc and 1.2% lead.

Mineralization in the district consists mainly of sulfides of sphalerite (ZnS), Galena (PbS) with minor amounts of pyrite and / or marcasite. The sphalerite is clearly dominant in proportion to the rest of sulfides. The sphalerite blend is the main ore for zinc and occurs in various forms ranging from massive, to crystals of small size, to botryoidal texture and filling fractures, although the most frequent texture is banded.

In terms of exploration, intensely dolomitized carbonate rocks affected by faulting/fracturing are the preferred locations for hosting zinc mineralization and the formation of ore deposits.

Joaquin Merino, P.Geo., is a “qualified person” as such term is defined in NI 43-101 and has reviewed and approved the technical information related to the Plaza Norte Project included in this press release and has approved its dissemination.

Figures accompanying this announcement are available at: 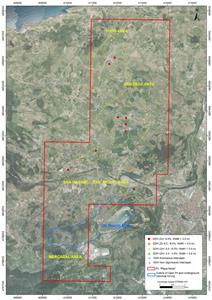 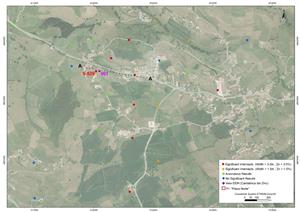